(CSLA Light supports both C# and VB - and probably most other languages too - so the fact that this particular demo is in VB shouldn’t be taken as an indication that anything only works with VB. Rather, I consciously switch between VB and C# for each demo I write, and it is VB’s turn.)

This is intended to be as simple a demo as I can create, and still show something useful. To that end, the demo has exactly one object, with three properties.

It is important to realize that when objects serialize and deserialize, they must have the exact same type name. This includes the assembly name, namespace and type name. The standard .NET way to represent an assembly qualified type name is something like:

Since the business objects in Library.Client must be compatible with those in Library.Server, both assemblies must compile to the same assembly name, and must use the same namespaces.

To accomplish this, the project’s properties must be changed so the Assembly name and Root namespace do not include the “.Client” part of the name:

I’ve changed them both to “Library”, so this will compile to Library.dll and the root namespace is Library.

The same changes to the Assembly name and Root namespace are made to the .NET Class Library project, Library.Server: 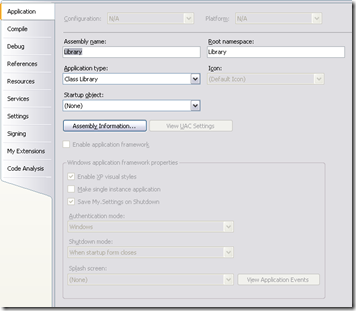 This project also builds a Library.dll with a root namespace of Library.

If you sign either project, you must sign both projects, and you must use the same key. That way they end up with the same effective assembly name, even though they are on different runtimes.

The end result is that a class in one project is serializable into and out of a class in the other project.

The CustomerEdit class exists in both the Library.Client and Library.Server projects, so the code is compiled into both runtimes. This means CustomerEdit can serialize and move between the Silverlight and .NET runtimes.

The class declaration should be pretty familiar to any CSLA .NET developer:

The only odd or new thing here might be the inclusion of the Csla.Serialization namespace. Silverlight has no concept of a Serializable attribute, so CSLA Light supplies one (along with NonSerialized). So in CSLA .NET this namespace exists, but is essentially empty, while in CSLA Light the namespace includes definitions for the attributes “missing” from Silverlight. The end result is that a Serializable class in .NET can compile in Silverlight.

This code compiles in both CSLA Light and CSLA .NET. Notice that I’m using managed backing fields. This allows the CSLA Light serialization to automatically serialize the field values to/from the .NET server.

You can use private backing fields if you choose. If you do use private backing fields, then you’ll need to override OnGetState() and OnSetState() and get/set each private field value into the serialization stream. This process is much like the old PropertyBag concept from VB6, and is necessary because Silverlight’s support for reflection is insufficient to automate the process.

By using managed backing fields, I avoid having to do that manual work, but I want to be clear that you ultimately get to choose between the two approaches.

The rest of this post will cover code that is either Silverlight-only or .NET-only. In this sample I’ve chosen to use compiler directives to separate the code, even though it is all in one file. You can certainly use partial classes instead, and based on this forum thread that might be the preferred approach.

But in this sample, you’ll find the following basic structure:

We’ve added asynchronous capabilities to the CSLA .NET data portal as well, so you can use this same async factory approach there as well, but typically I don’t think that makes a lot of sense.

In any case, the factory methods are designed to be called by the Silverlight UI, and they look like this:

In both the create and fetch scenarios the steps are:

For this example, I’m requiring that the UI developer pass in the event handler method. In VB this is done with the AddressOf command, and in C# it is a delegate, an anonymous delegate or a multi-line lambda. I’ll get to the UI code in a future blog post.

When the data portal is in remote mode, it communicates with a web server running a special CSLA .NET data portal host that is compatible with CSLA Light. I’ll get into the server configuration in a later blog post.

The result is that a BeginCreate() or BeginFetch() call results in the data portal using WCF to call the server. When the call gets to the .NET server, it follows much of my discussion in this blog post. A few things have changed in terms of how a factory object is created, but that’s a topic for a different sample app.

The one other bit of important code in the Silverlight-only area is a Public constructor:

The serializer used by CSLA Light is the MobileFormatter, and in Silverlight this serializer requires a Public default constructor on any object it deserializes. This is because Silverlight doesn’t allow the use of reflection to create an object with a non-Public constructor like you can in .NET.

This is unfortunate, because a UI developer might accidentally try to use the New keyword to create an instance of the object, like:

While this would compile, it won’t really work - not as expected anyway. The UI developer really needs to call one of the factory methods shown earlier to create or retrieve the object successfully. This is why CSLA .NET constructors are typically non-Public, to act as a reminder to the UI developer to use the factory methods. In Silverlight you’ll just have to use code reviews to ensure that the UI code is correct.

To keep this sample as easy as possible, the DataPortal_XYZ methods don’t actually call a data access layer or talk to a database. They merely set a property on the object to indicate which of the methods was invoked, and where it ran (on Silverlight or on .NET):

There’s nothing special about these methods. You could write this code in CSLA .NET 3.5 for a pure .NET application and it would work just fine. Sure, it is simplistic, in that I’m just loading some hard-coded values into the object’s properties, but you should be able to imagine these methods calling your data access layer and getting back a DataReader, DTO, entity object or whatever you are using; and then loading the object’s property values from that data source.

What I hope you take away from this post is that you can take an existing CSLA .NET 3.5 class (that uses managed backing fields), and get it running in CSLA Light too with very little effort. In fact, all you need to do is: