CSLA .NET version 3.6 is a framework for creating business applications using object-oriented design concepts, in a distributed computing environment. CSLA .NET for Windows and CSLA .NET for Silverlight share many common features and capabilities, though they support different platforms. The commonality between the two framework implementations allows sharing of business object code between .NET and Silverlight, while the differences allow you to exploit the power of the two different platforms.

CSLA .NET version 3.6 is the latest evolution in the CSLA .NET framework, which has been around since 2001. Over the past eight years the framework has grown and changed in many ways, and is now one of the most widely used open source development frameworks for the .NET platform.It is covered under a very liberal license and has a vibrant, helpful and friendly community.

The primary goal of CSLA .NET is to enable you to build a rich, powerful and flexible business layer for your application. 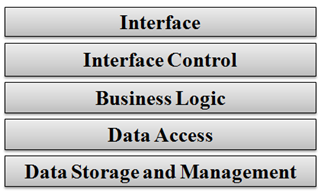 This business layer is composed of business domain objects that encapsulate your business logic (calculations, algorithmic processing, validation and authorization). These objects should be designed based on the business use cases for your application domain. With some reasonable care, it is possible to create a single set of business objects that work within both the .NET and Silverlight environments.

In some cases your Silverlight business objects may contain the exact same object code used for CSLA .NET for Windows applications, though in most cases there will be some small variation of code. In most cases more than 90% of your object code will be shared between .NET and Silverlight, with less than 10% of the code being different. The differences are primarily due to the asynchronous nature of Silverlight programming, and the more synchronous nature of traditional .NET programming. If you are willing to apply the same asynchronous designs to your .NET implementation you can achieve 99% or 100% code sharing between the two platforms.

My Expert 2008 Business Objects book (published by Apress) covers these subsystems in detail.

These subsystems are exposed through a set of base classes from which you inherit to create your business objects. These base classes enable a set of object stereotypes:

The end result of building your business objects using CSLA .NET is that your objects are created in a consistent, standardized manner. So not only do your objects automatically gain substantial benefit from all of these subsystems, but your overall maintainability is radically improved thanks to the consistent architecture, design and coding of your application.

The concept of mobile objects is a technique that supports the use of rich business domain objects in distributed application environments. Specifically, the idea is that your business objects are mobile, able to move physically from one computer to another to take advantage of the resources available on each computer.

CSLA .NET includes a component called the data portal which is responsible for providing the mobile object functionality. Using the data portal, your business objects may come into existence on an application server so they can efficiently interact with your data access layer (and database). The objects may then physically move across the network to the client workstation (web server, Windows client or Silverlight client) where they can efficiently interact with the user by being data bound directly to the UI. Once the user is done interacting with the object, the object may then move back to the application server so it can interact with the data access layer to update the database.

Mobile objects are an incredibly powerful technique for exploiting the power of object-oriented design and programming in distributed environments. The CSLA .NET data portal abstracts the complexity of this concept. The result is that your application can switch between 1-tier, 2-tier, 3-tier and even 4-tier models with no change to code - the change is purely one of configuration.

CSLA .NET for Windows allows you to easily build WPF, ASP.NET (Web Forms, AJAX and MVC) and Windows Forms user interfaces on top of your business objects. It also supports WCF service, Windows Workflow and asmx web services interfaces. Technically you could create all of these interfaces on top of the same set of business objects, though most applications require only one or two types of interface (Web Forms and WCF services for example).

In WPF the following controls are provided:

In Web Forms the following controls are provided:

In Windows Forms the following controls are provided:

CSLA .NET also includes functionality to assist in the creation of services and workflow activities.

For WCF and asmx services the following component is provided:

For WCF services, there is another component:

For Windows Workflow the following component is provided:

CSLA .NET for Windows provides a great deal of flexibility in terms of data access. CSLA .NET is not a data access layer or an object-relational mapping (ORM) tool. However, CSLA .NET does provide a level of formalization around how your application interacts with your data access layer or ORM. This formalized flexibility allows you to use a wide range of data access technologies, including raw ADO.NET, DataSets, LINQ to SQL, ADO.NET Entity Framework, NHibernate, Paul Wilson’s ORM mapper and many other technologies.

CSLA .NET for Silverlight enables a data access model where your business objects invoke remote services to retrieve or update data. You can use this model to implement client/server or service-oriented application designs. For example, you might use ADO.NET Data Services to expose data services from a server, and use CSLA .NET for Silverlight to create business objects and a Silverlight UI to interact with those data services.

The CSLA .NET data portal enables the use of mobile object concepts in your application. This is largely transparent to your code, and the code you do write to interact with the data portal is very standardized. The benefit of using the data portal is flexibility; you can switch your application from a physical 1-tier deployment to a 3-tier or even 4-tier deployment purely by changing configuration - no coding changes are required. 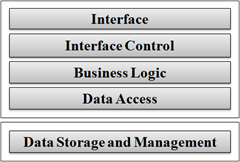 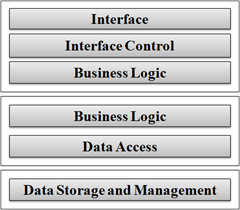 Again, it is possible to switch between these physical models purely by changing configuration. Your UI code, business object code and data access code remains entirely intact across all three deployment models.

In the 3-tier model, the business logic layer (the assembly(ies) containing your business object code) is deployed to both the client and application server. Your business objects literally move between those two machines through the data portal.

The data portal uses standard .NET technologies such as WCF to manage the network communication. It is implemented using powerful design patterns such as channel adapter, provider and message router.

CSLA .NET for Silverlight supports 1-, 2-, 3- and 4-tier physical deployments. The 1-, 2- and 3-tier models employ the same architecture as CSLA .NET for Windows. The 4-tier model is a little different. 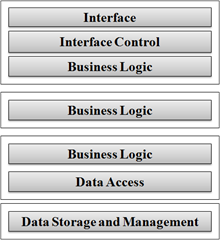 In the case of CSLA .NET for Silverlight’s 3- and 4-tier models, the data portal is more advanced because your business objects literally move between the Silverlight client and the .NET server(s). This means your objects are moving between different platforms, as well as different machines. This is usually entirely transparent to your code, so the resulting functionality and your code is the same as in a pure .NET application.

It is important to realize that in the 3- and 4-tier deployment models, for both .NET and Silverlight, your business code and business objects are fully functional on each machine. This means you have the flexibility to run logic on the client, the server or both as required to meet your applications needs.

The data portal managed model is ideal when using a data access layer built using raw ADO.NET, simple file I/O or other relatively direct techniques. It is the simpler of the models, because the data portal provides a lot of automatic management of your business objects.

The object factory model is ideal when using an ORM or a more sophisticated data access layer. It is more complex, and requires more coding on your part, but is far more flexible. It is also implementing using an open architecture, which enables some test driven development (TDD) scenarios that are (arguably) more difficult to achieve using the data portal managed model.

CSLA .NET is a powerful, time-tested framework that supports the creation of an object-oriented business layer for distributed application development. It helps you encapsulate your business logic in a set of rich business domain objects, and provides your objects with powerful features around data binding, business logic, validation and authorization.

Starting with version 3.6, CSLA .NET supports all common interface types on the .NET platform, and provides seamless support for the new Silverlight 2.0 platform as well.